My blog is about evolving from one particular “phase” into, or through, the next as seemlessly as possible. Just moving. No phases necessary. And mostly, to do so with grace. While my desire to accomplish this is sincere, it is clear that it is much more challenging than I first considered. It gets down to the tiniest, most nondescript decisions. Perhaps even to each single thought. And if this is the case, how can I ever expect to control and direct such thoughts gracefully?

I guess it is more important not to control the actual occurrence of the thought, but instead, what one does with it. Because thoughts can be easily – well, maybe not so easily – but they can certainly be rejected. But how does one define a “graceful” thought?

For example, I am challenged by my relationship with my three daughters. In particular, my middle daughter. I always considered us to be very close. But somehow we really aren’t close at all any more. There was no big fight, not even a small fight. There aren’t any specific issues of which I am aware that fuel this distance. I can’t point to when it happened, or why, and until very recently, even that it did. But I would be lying to myself if I were to think that all is fine. Because it just isn’t.

Let me explain. While living at home, my daughter would share most things with me – sometimes surprisingly so. For example, while in high school, she and her boyfriend came to tell me that they were considering having sex (each for the first time) and wanted to discuss this with me. I was flattered that they would want to talk with me, and felt comfortable doing so. And I reiterated that to them – that I was glad they felt they could share such an intimate issue with me, and trust me to respect and understand what they were facing.

When she went to college, I tried hard to give her the space I assumed she craved – at least the space I remembered wanting when I had left home. My mother insisted from college forward that I call her at least once a week, on Sunday. If I failed to do so, I had to beg forgiveness, even if my reason was valid. I remember terrible fear and guilt while on a camping trip, before the days of cell phones, frantically searching for a phone in order to meet her requirement. We drove over an hour to locate a pay phone, not because there was any important news to share, but because I had been told that I was *required* to call every Sunday. I was taught never to question such a rule if it came from my parents.

Eager to avoid continuing such an unreasonable requirement for my daughter, I tried not to “bother” her. Most of the time, I waited for her to contact me. This gave the unfortunate impression to her that I was, in essence, abandoning her and no longer interested in her life. She told me this tearfully during a visit to her campus, and I was frankly, a bit shocked. I remember her telling me, “Most of my friends’ mothers even know when they have an exam, or presentation. You never even ask!”.

So this balance between expecting too much from the other, and not expecting enough has been ongoing for many years. My daughter is now in her mid-thirties, married, with a successful and demanding career. It seemed as if, until a year or so ago, we had settled into a routine, if not satisfying, habit of speaking every month or so. Then the news came that she was pregnant. I was thrilled with the news, but not so much the fact that I was not the first one she told. I was, instead, told after her sisters and her mother-in-law. I tried hard to tell myself that this did not matter whatsoever, and I honestly didn’t want it to matter to me. But it did. I wanted to be the first she wanted to tell outside of her marriage, of course.

Next came the news that she was pregnant with twins. This was shocking to everyone, as no one in either family has any history of having twins. This, too, was shared with me after a smattering of others, this time including a college friend. Again, I didn’t *want* to care. So why did I? Why did that haunt me?

And, sadly, next came the news that she had lost both twins to miscarriage. This news was delivered by her husband via a group email to their close friends and family. But this was *my* daughter. I felt desperate to speak with her immediately. I needed to know she was okay, that she was not devastated. But, appropriately, her husband was extremely protective of her. He simply indicated that she was, “. . . resting comfortably and would appreciate time and privacy.” I immediately emailed him to tell him I wanted to come see her the next day. That I wanted to be there for her. Imagine the hurt when I learned she did not want me to be there. My integral relationship with her had somehow faded, and had been replaced with her new husband and her sisters.

If you had asked me any other time whether *I* wanted to be the most important relationship in her life, I would have given an adamant NO. Even at that time, my logical self was glad she had the support of a loving husband, and I could not have been more proud that my daughters were each others’ closest friends. Yet there it was. My feelings were hurt, rational or not.

And now, our communication has become intolerably rare to me. Perhaps it is my turn to feel the rejection she described in college. My efforts to call her are left unanswered. My text messages and emails get no response. Last spring, I decided to visit her alone and try to gain some insight as to how she was feeling about our relationship. Among all of these changes had been some angry times. Thinking about my visit, I was nervous. Nervous to visit my own daughter. For a mother who always felt included, and prided myself for being so, I felt lost.

I was welcomed by my daughter and her husband, and enjoyed every moment we were together. I will never forget one night overhearing her tell her husband, “I feel so happy right now”. He asked her why she felt so happy, and she replied, “I don’t know. It just feels really great”. There were no disagreements that visit, not even awkward moments. I told her that I wanted to keep in better touch, that I wanted to be a part of her life again. She agreed, tearfully hugging me goodbye, and promising to communicate not only more often, but more meaningfully.

So, that brings us to today. Six months later. We have spoken on the phone only twice, once when she was visiting her sisters and they decided to make a “group call”. She didn’t call me for my birthday for the first time ever. She wrote me an email the following morning, explaining that she was sorry – she hadn’t forgotten, but had timed it badly. She was traveling, and arrived at her hotel just as she was being picked up for a dinner meeting, making a phone call impossible. I felt much better hearing her reason, and completely understood. Of course that would make it impossible to call that night.

But that was a month ago. I still have not spoken to her despite a couple of attempted calls to her, and texts sharing small pieces of news. In the past, she would say, “Sorry I haven’t been a good communicator recently. . . ” and go on to tell me why. My response was always to reassure her that I understood. She is busy with her career and her husband, etc. But that isn’t true. It *isn’t* okay with me that she isn’t communicating. I am not angry. But I am sad. And to tell her that it’s fine is not honest. In fact, it could send an underlying message that I don’t care, and by extension I don’t care about her.

The truth is, I miss her every single day. I think of her each day, wondering what she is up to, and what she is thinking about. Is she traveling again soon? How long will she be away? How is her husband’s job search going? And how will that affect her current position? I have decided that asking her these questions is not being intrusive. It is showing her that I *do* care – more than I think she can know.

I am going to send her a letter. Perhaps even a handwritten letter, expressing that in my efforts to avoid pressuring her, making her feel the way I used to feel with my own mother, I have not been honest. I need to know her again. This won’t be a demand, but instead, I will try to communicate it as a sincere desire to show my love and my constant interest in her life, her thoughts and her passions. I feel like I have missed so much. I don’t want to miss any more. It will be a difficult letter, but well worth my effort. I hope she doesn’t find it difficult to hear, or to respond to but instead interprets it as my honest attempt to resume involvement in her life.

This is a post I wrote exactly a year ago today. I never posted it on my blog because the feelings were still a bit raw. As I read it today, I remembered exactly how I felt then. Much has changed in a year. My daughter and her husband had a baby on June 1st. She is absolutely perfect, and is so fortunate to have such adoring and happy parents. My daughter still doesn’t communicate on a regular basis, but she makes a real effort to send pictures of the baby a couple of times a week. And we do talk more often than we did a year ago, perhaps because we have more to talk about. I no longer feel sad, and I don’t really feel such a loss anymore. Perhaps the baby has filled in the gap that our own conversations couldn’t. But everyday I celebrate the joy she has with her husband and daughter. And I know she will be calling me – never for my advice, because she just isn’t like that – but to share milestones and happiness. I am so grateful.

View all posts by mylakesideviews 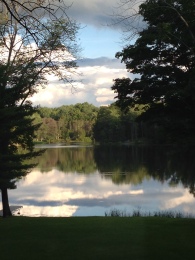